During a stay in Spain in order to collect money for children with cancer, I had the opportunity to visit the andalusian city Granada. Although having a lot more to offer, without doubt the Alhambra palace is the most stunning sight, with tons of details fighting for attention. 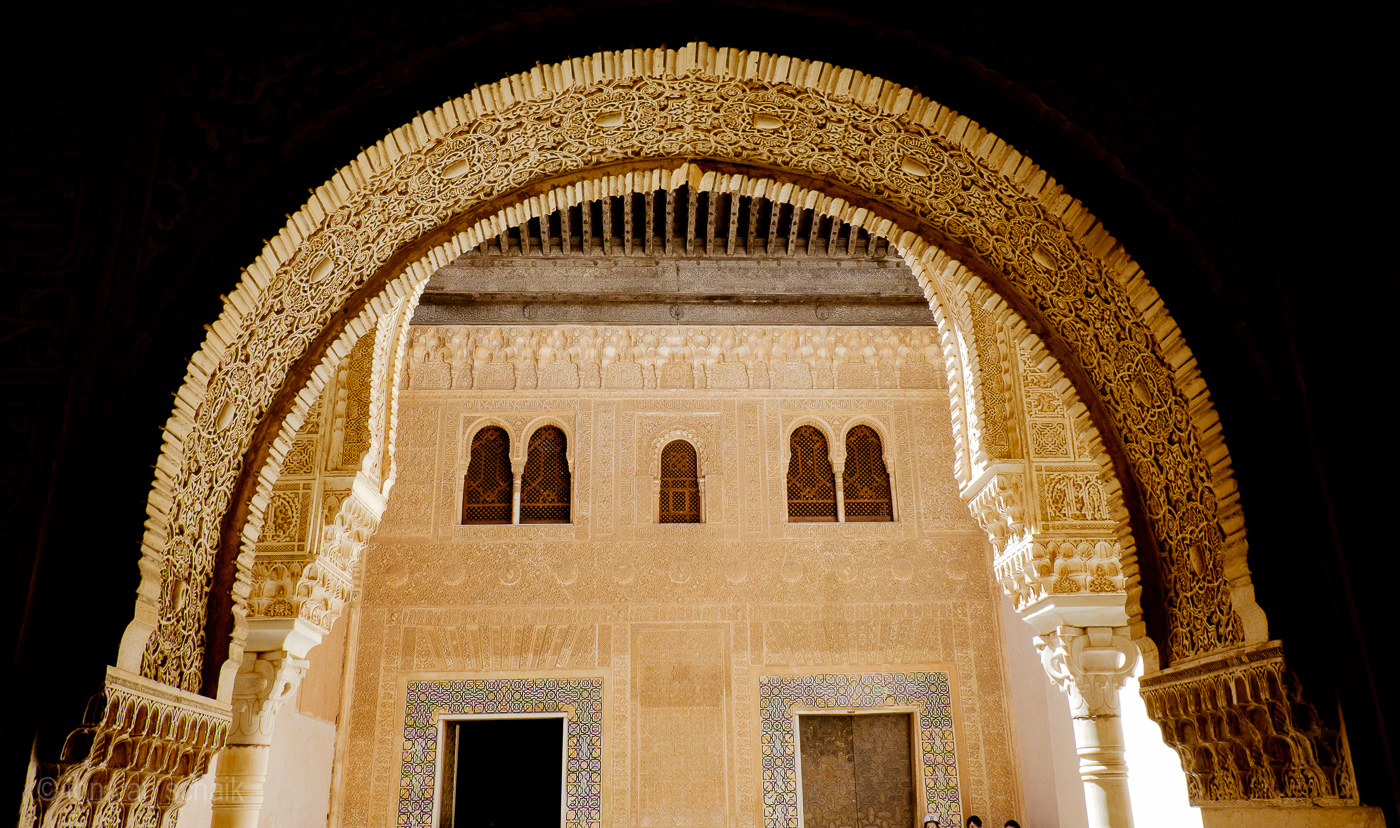 Found in Granada, south andalucían Spain, Alhambra means red castle. Robust outside, inside a totally different world is entered. Every wall, cieling is carved with fine abstract detail. Never-ending lines knotting and unknotting, wall to wall, room to room. Without beginning and without ending referring to God who always was, is and will be. Elegant patterns transforming to smaller knots, at the same time spreading out of it. Again symbols of God as the one point where all is starting and coming together. In adittion God’s greatness is written in stylish calligraphic forms over and over again. A building in devoted worship to God. 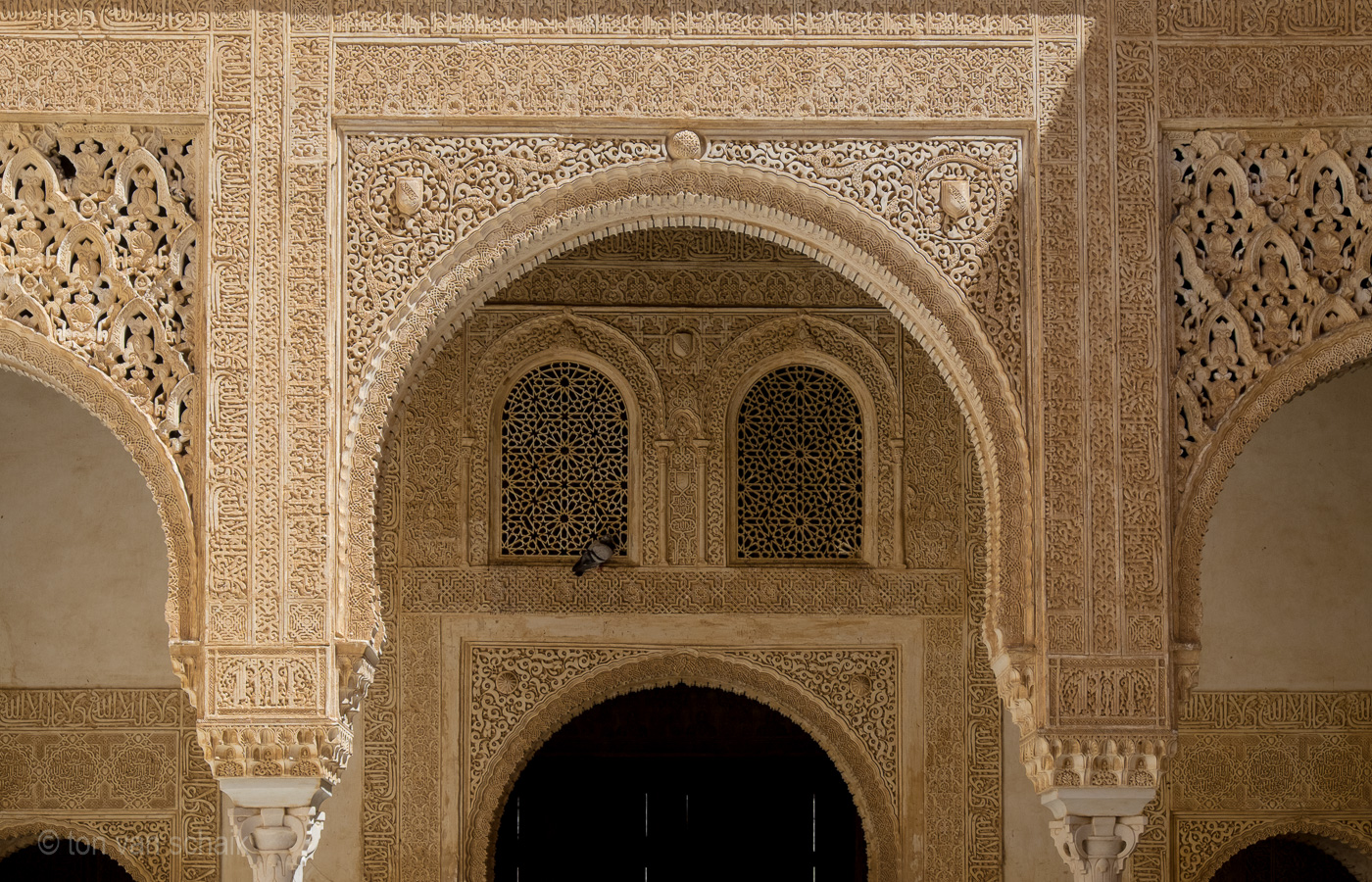 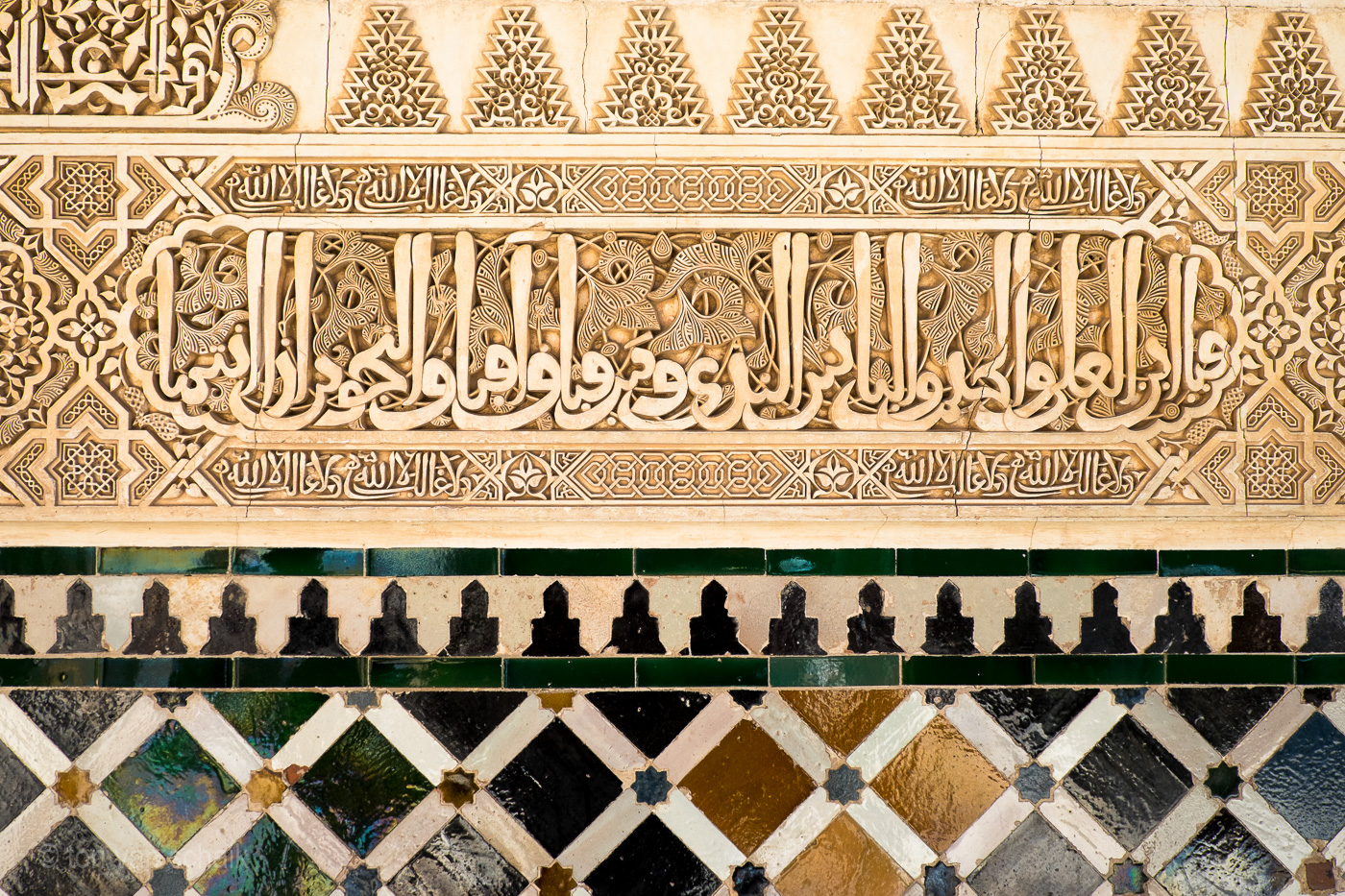 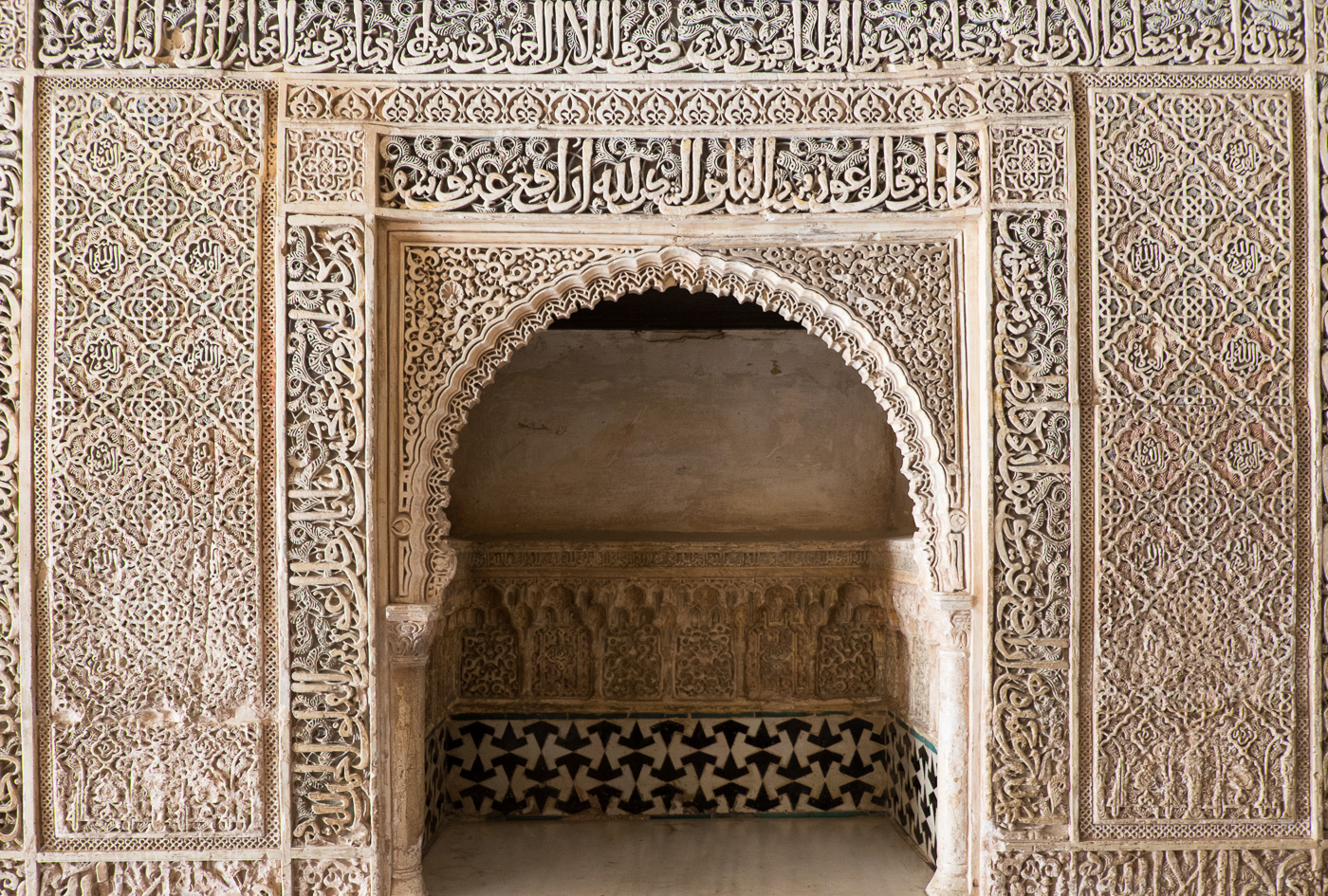 The Alhambra reveals another side. It is not a mosque but a human place to live in. Instead of being overly “heavy-pressing religious” the whole place is colourful, light, elegant with a sensual feminine feeling, so different from the masculine European castles. Built on countless fine pillars it resembles the nomadic tents, bringing comfort in the desert. 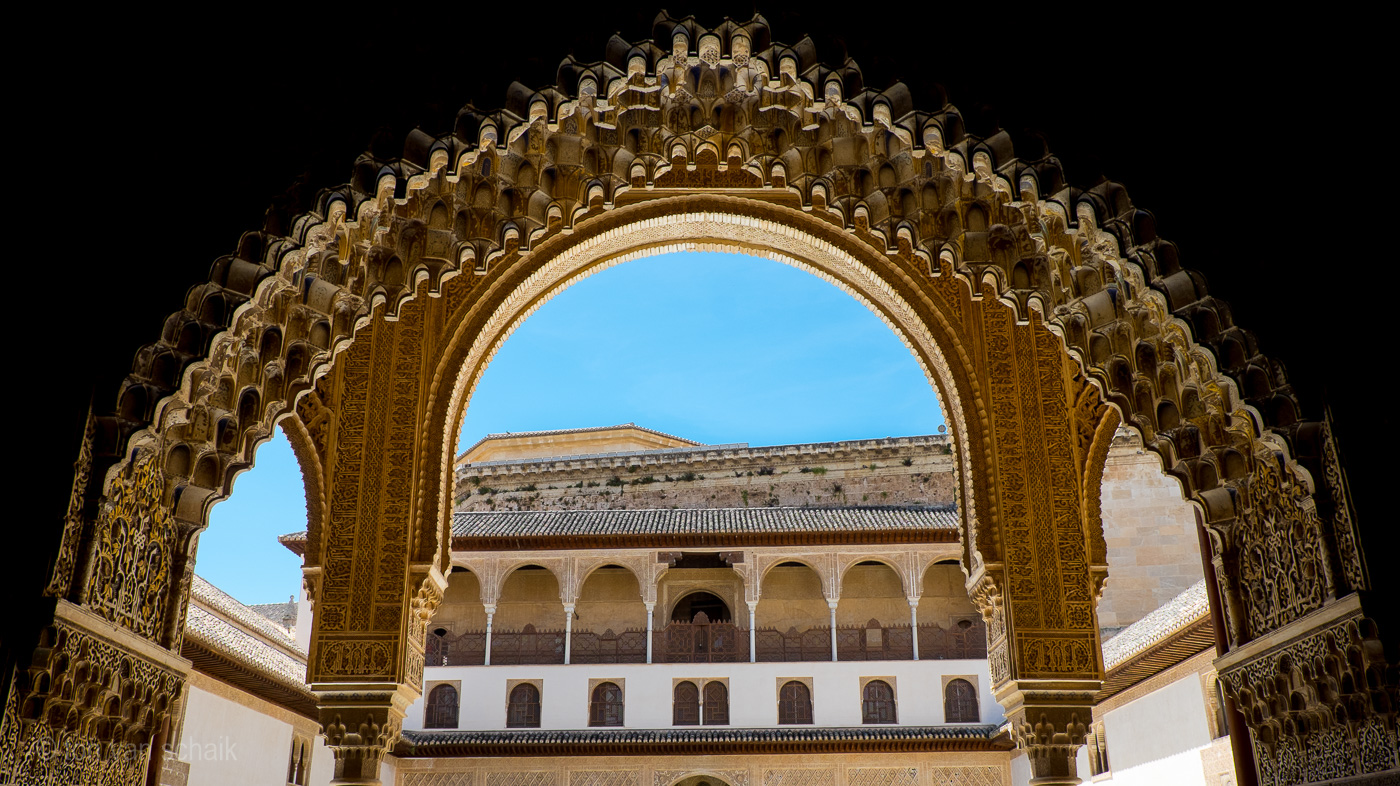 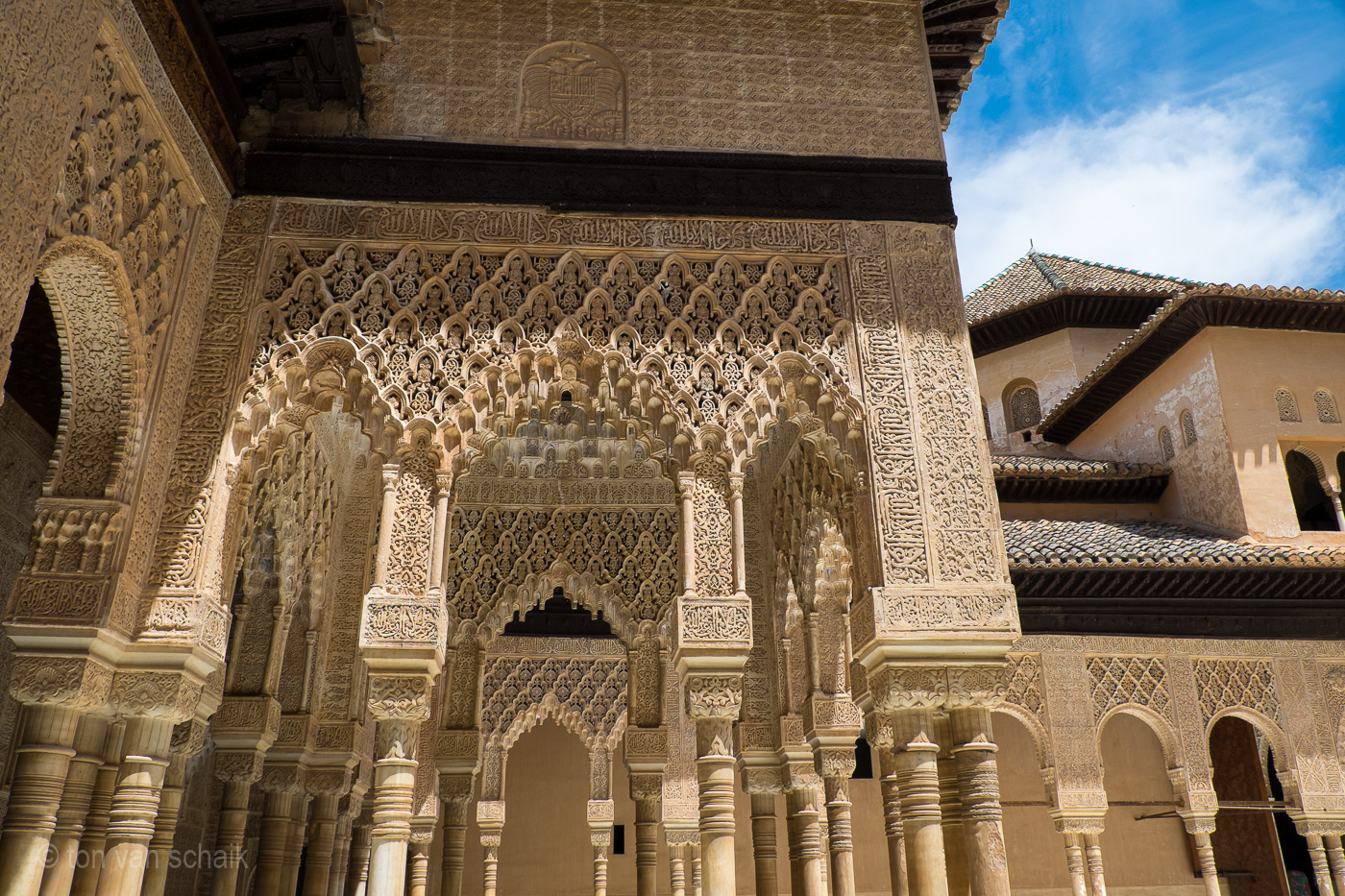 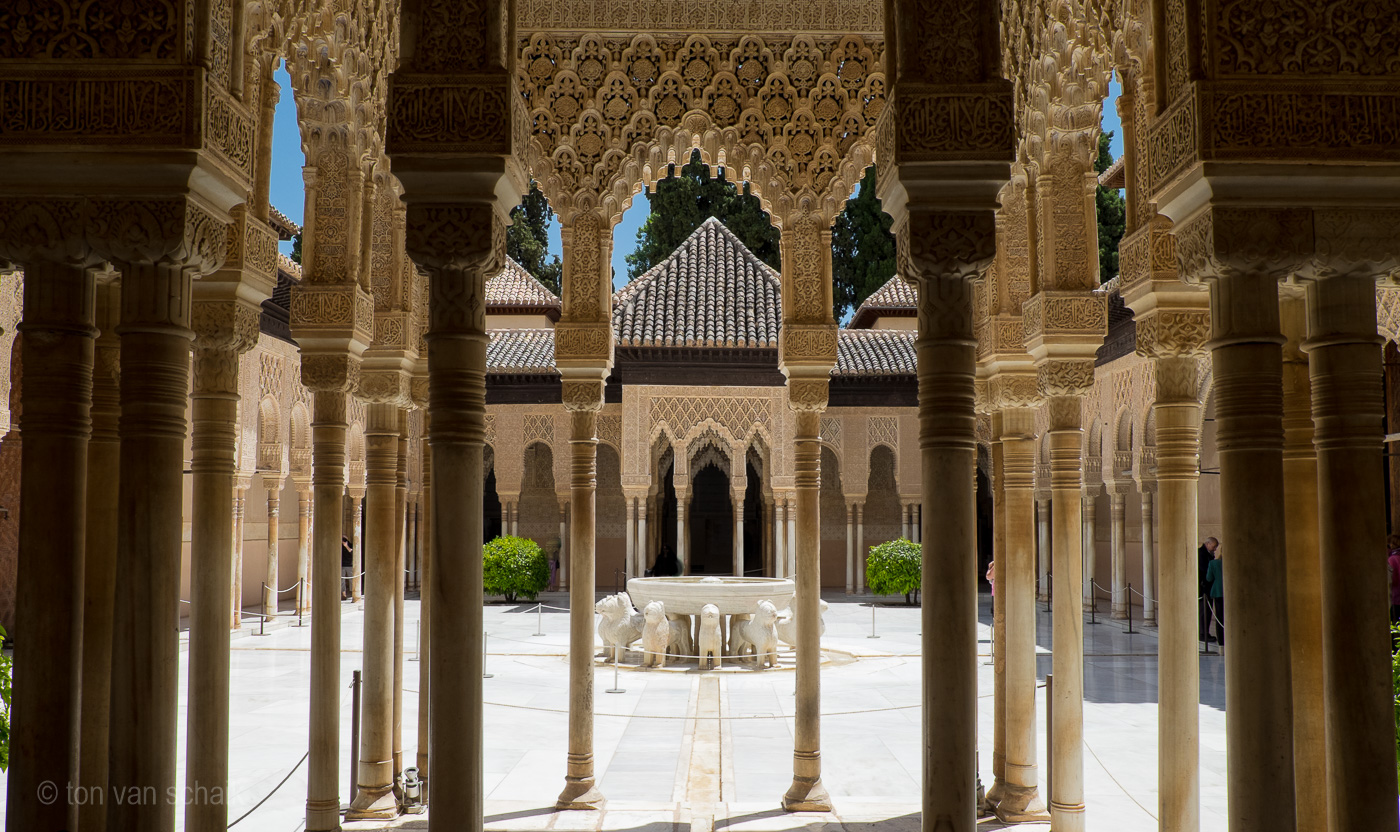 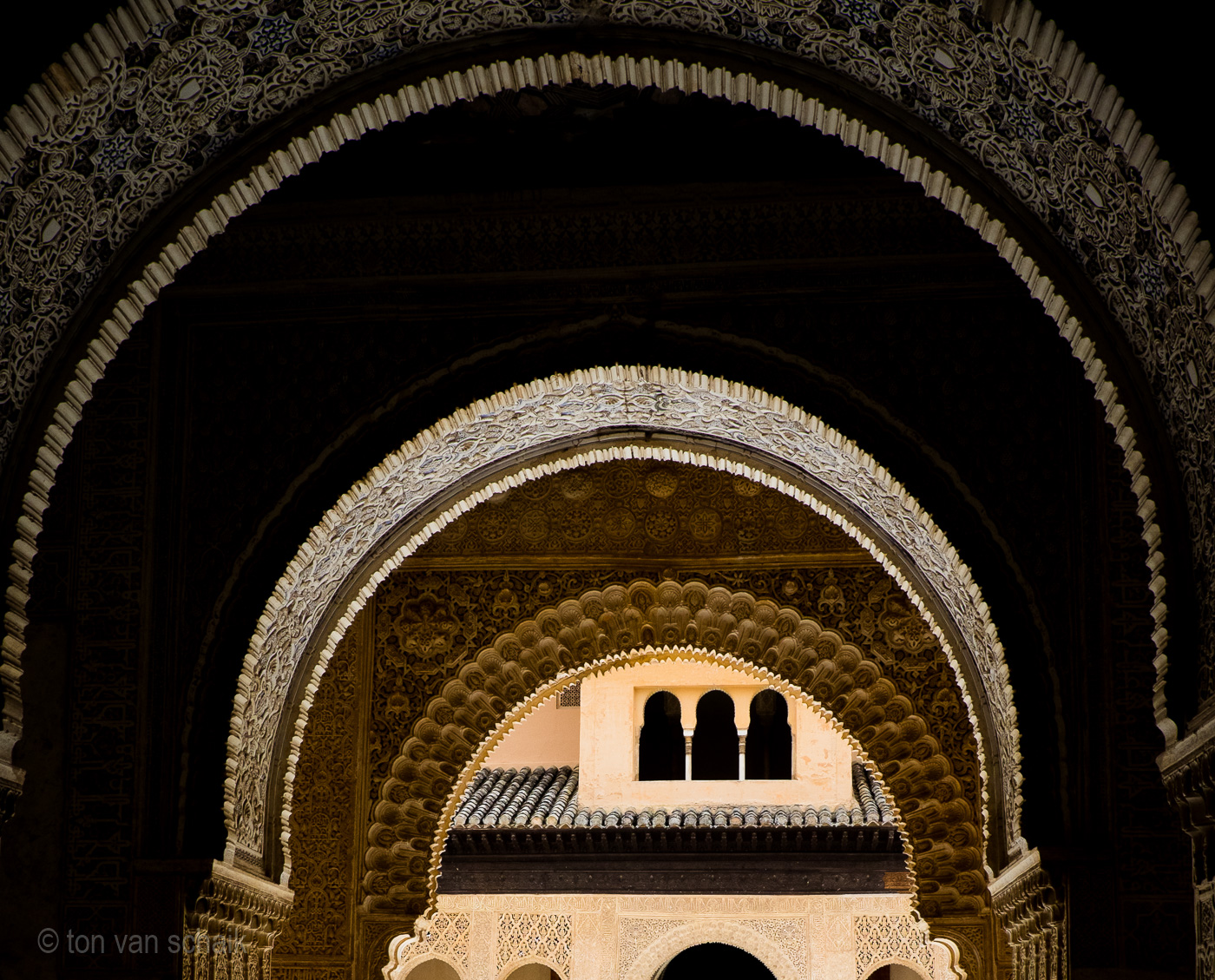 The building holds another trick. From the background mountains a river is made to change course. Bringing water to gardens full with flowers and cool green, otherwise impossible in the southern heat.  The same water is leaded withing the buildings, to fountains feeding fine canals with fresh flowing water though the inner rooms. 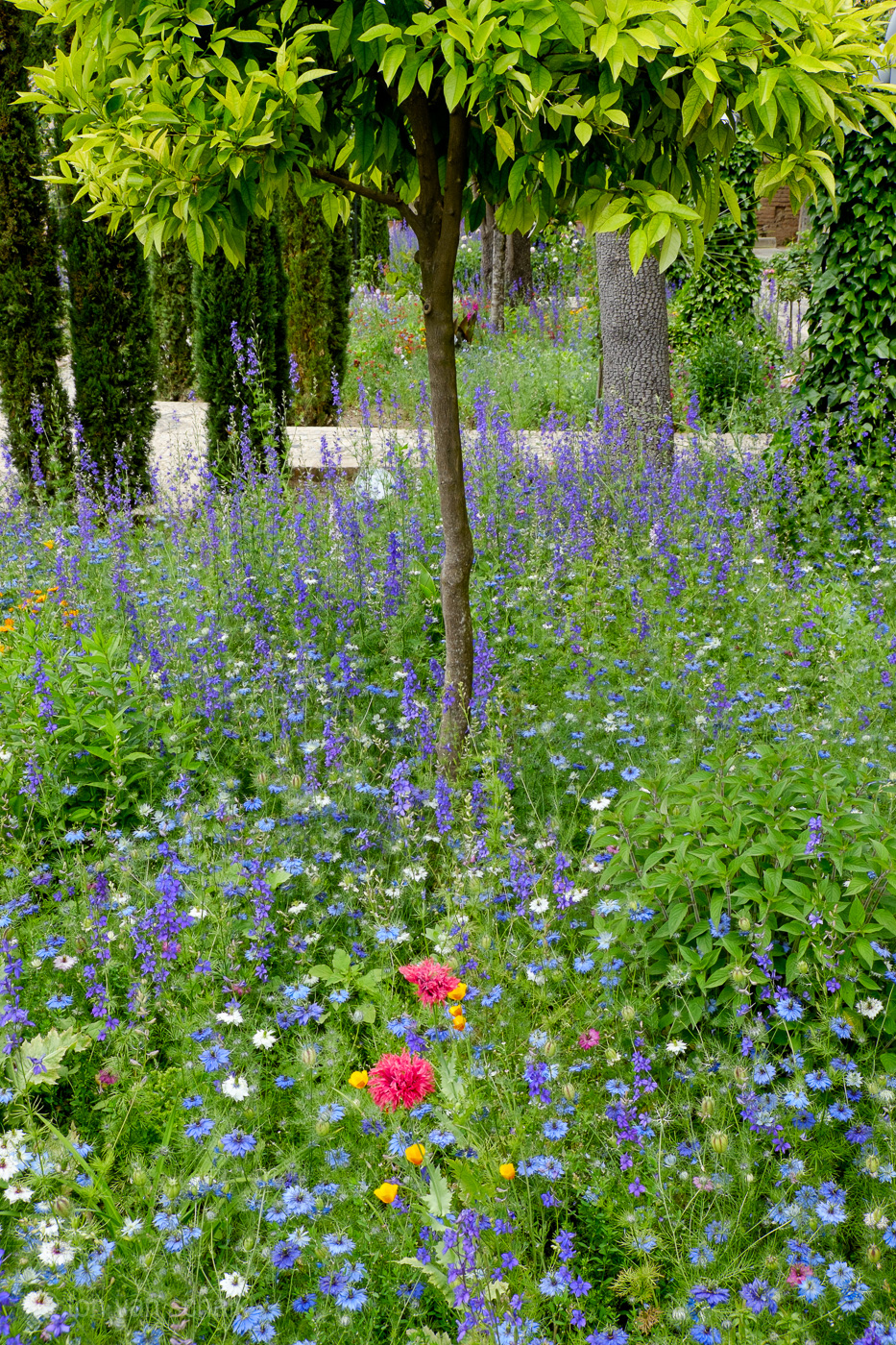 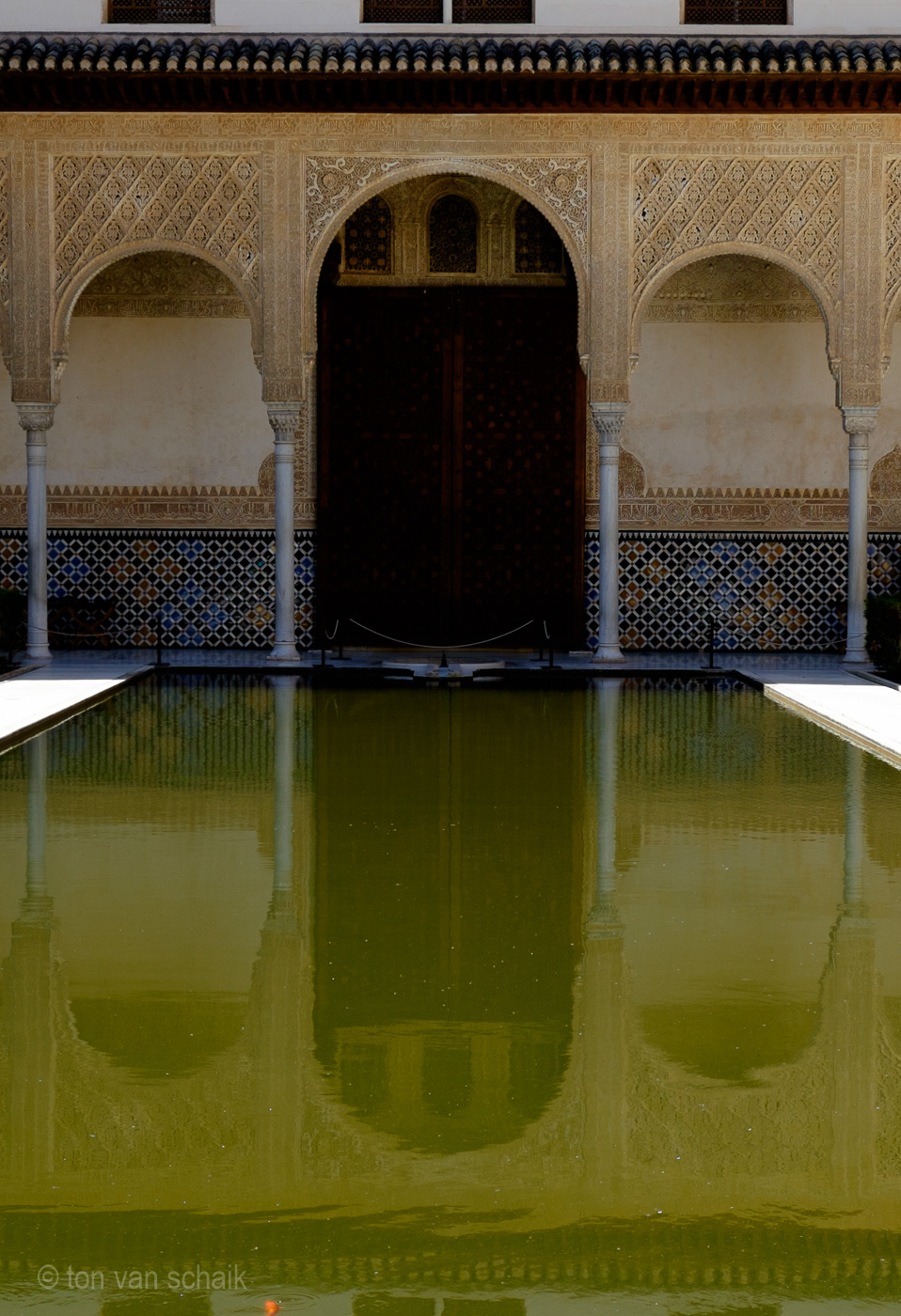 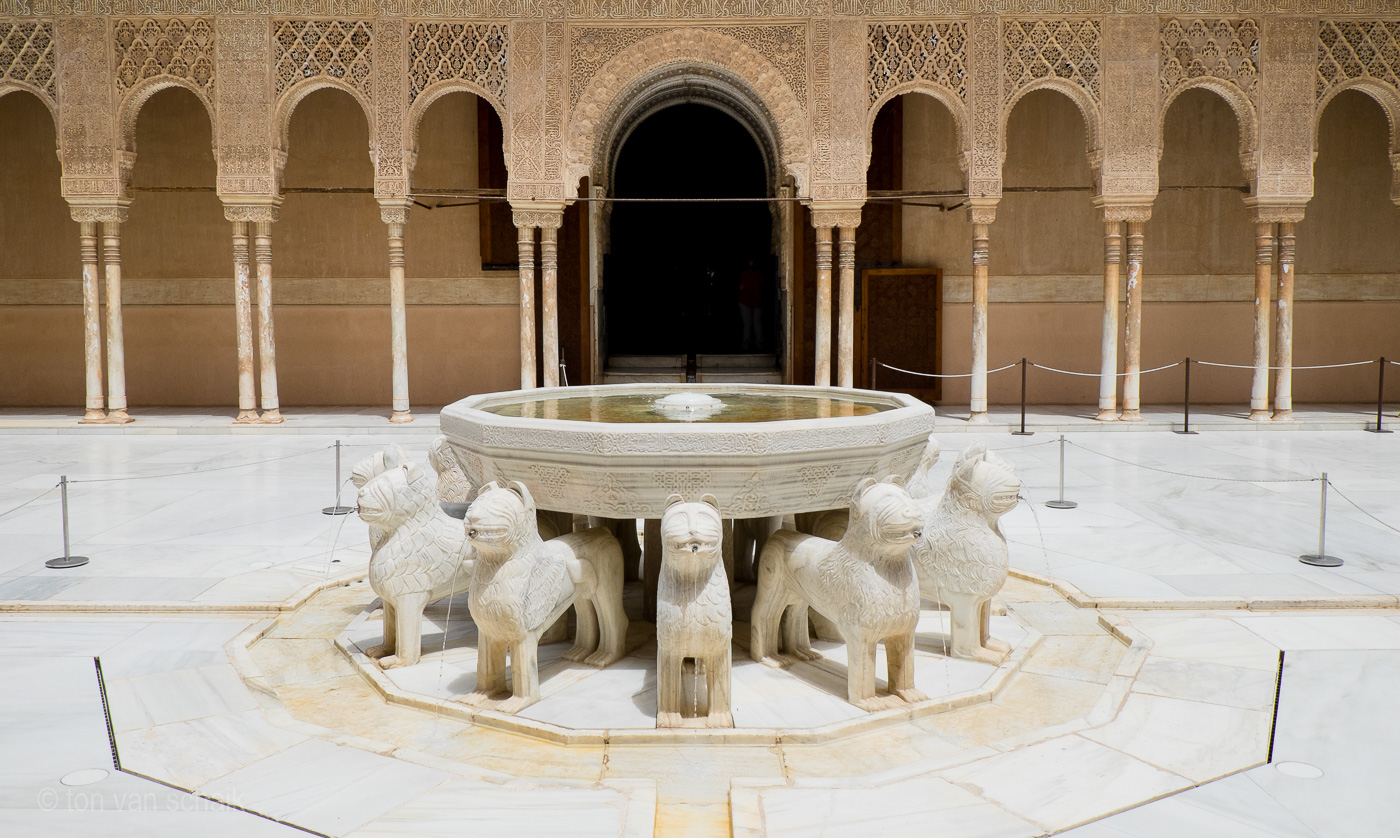 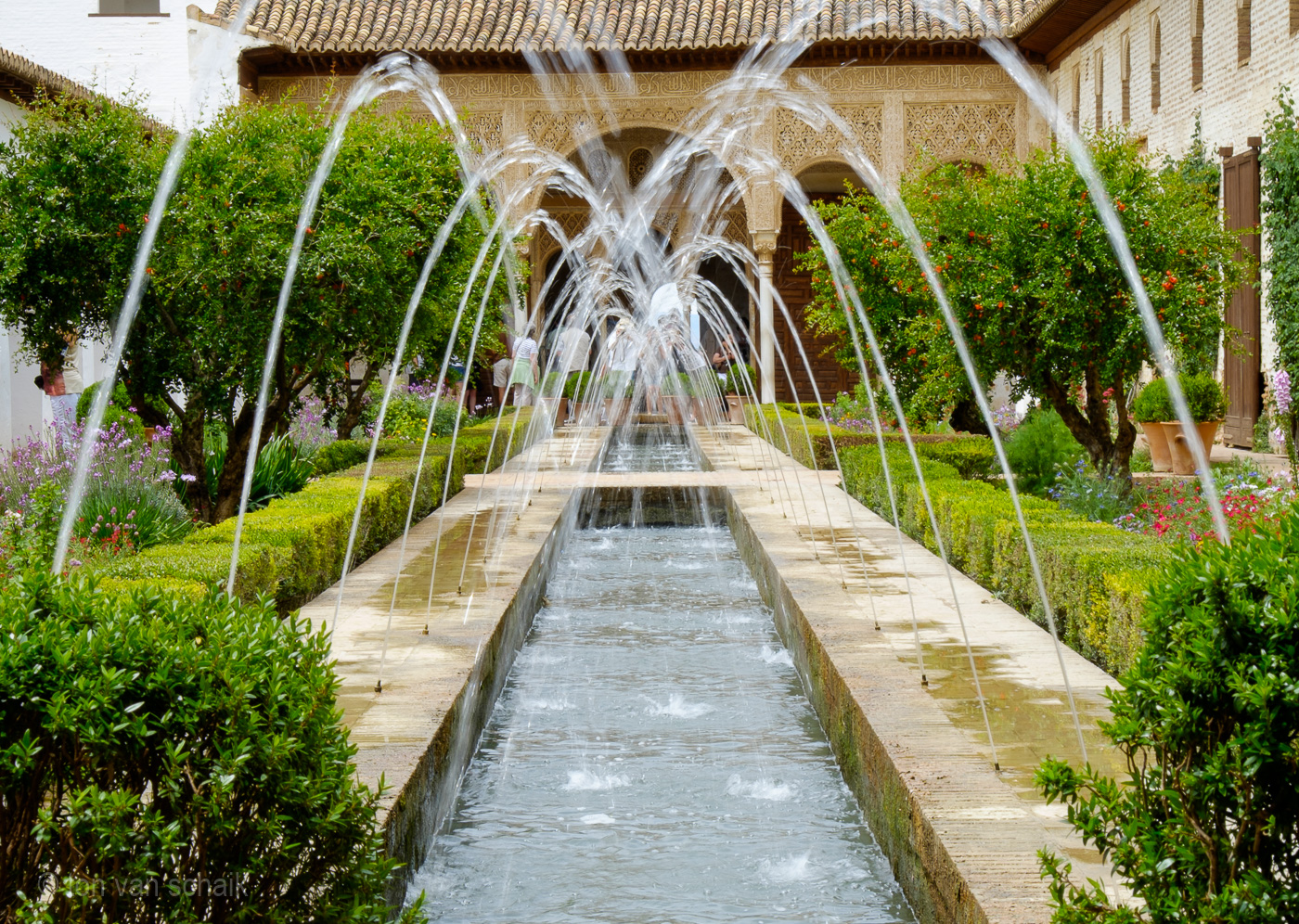 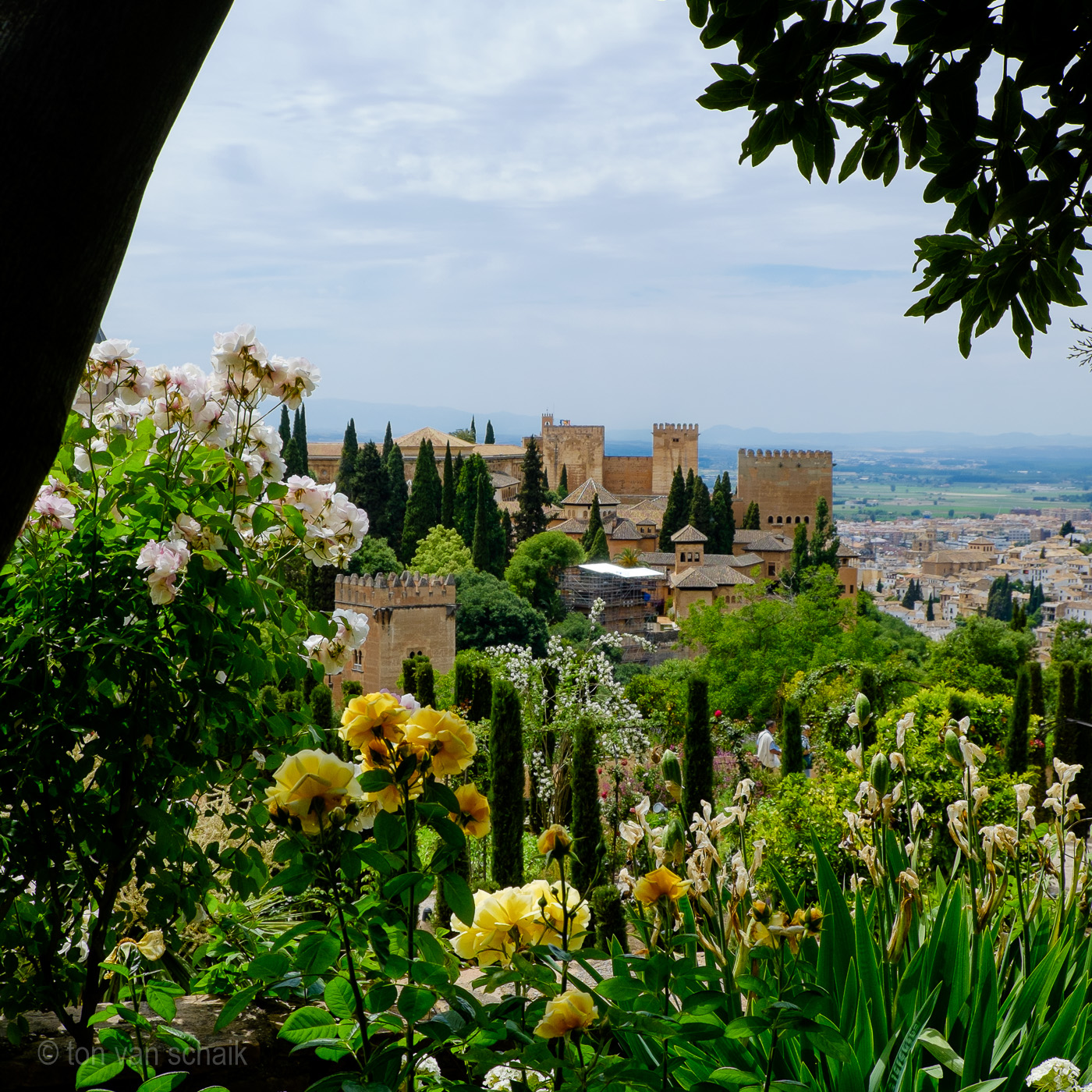 This place reflects early Islam culture, spreading astronomy, mathematics, medicine, acrchitecture, arts and tolerance towards Jew and Christians who together with Muslims acknoledged the same old Bible. Being here it is difficult to understand nowadays jihad groups talking about going back to early Islam glory, but are behaving so contradictory to it. The Books unchanged, it must be the interpreting people bearing responsebility for choices between hope or evil.

All images with Fuji XE2 and 18-55/2.8-4.0 lens in RAW, processed with minor tweaking in lighroom. The harsh southern sun demands a large dynamic range. Images taken from within the shadowed rooms through the arches, with brightly lit white outside walls, occasionally lead to highlightclipping, but only a tiny bit. 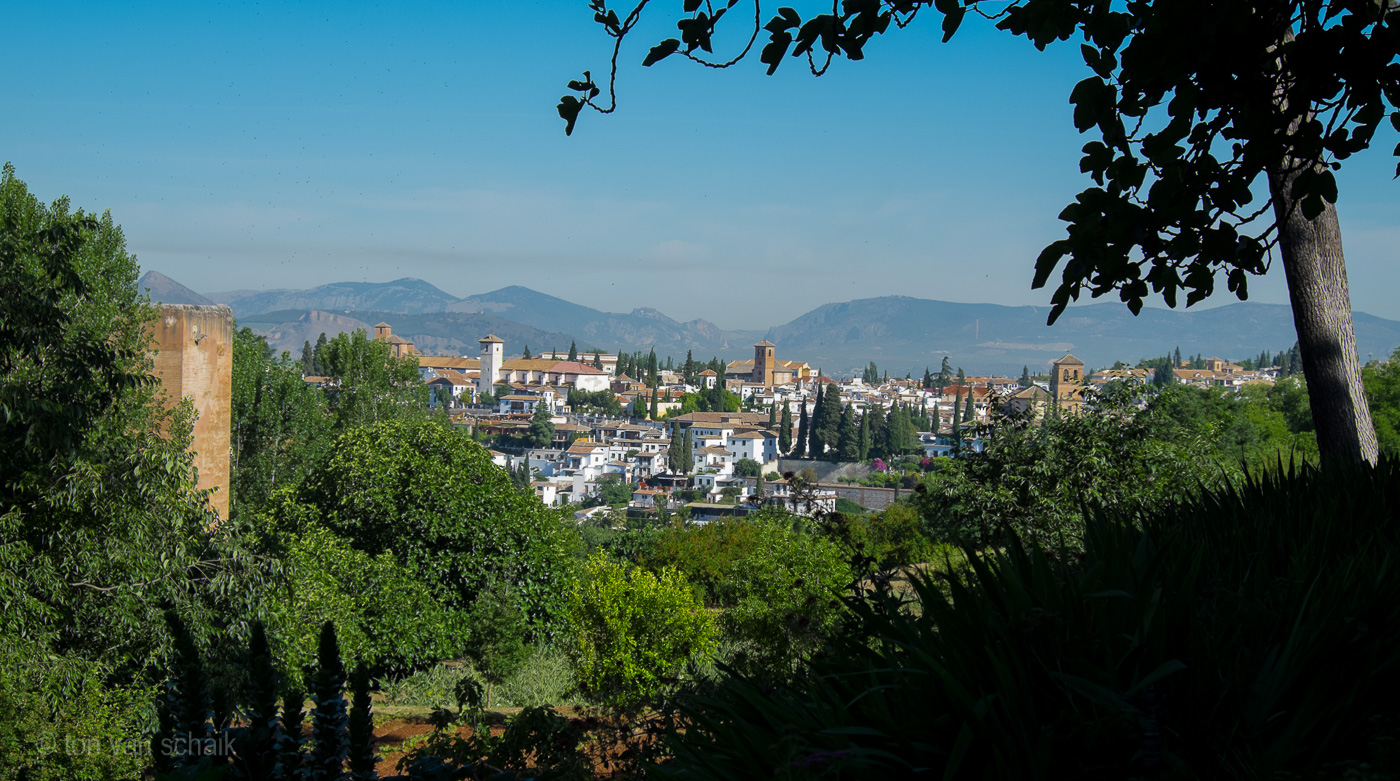 for portfolio and more press  HOMEPAGE

Your report has been successfully sent. We will look into it.